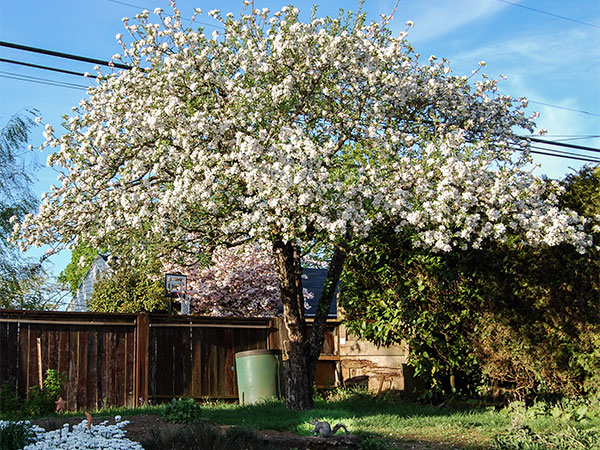 My week was almost completely derailed by some unwelcome house guests.

We had squirrels in the fireplace. We’ve lived in this house forever and never had this problem before. It’s a long story with many chapters but for now the squirrels have all been captured and released outside and the chimney is screened off so they have to find another place to live.

The apple tree is gorgeous this time of year. I have tried different angles and different times of day and can’t capture how pretty it looks. I think the tree is near the end of its days. When you stand next to it you can see that the trunk is partially hollow and the main limbs as well. It’s hard to believe it has so many blooms when the foundation looks so sketchy.

(Also, can you spot the squirrel in the photo? I don’t know if it is one that was living with us.)

I’ve been trying to rearrange my time so I can get more writing done. Or, any writing would be nice at this point.

I don’t watch that much TV anymore but I have a few shows and it’s nice to have something when I’m out of brain juice at the end of a long day. I quit three shows last week including Scandal. I loved the first few seasons of that show but I noticed it was always the last thing left on the DVR and even then I would put off watching it. I gave up in the middle of the Susan Ross episode.

I was dismayed to check my future recordings to see three new shows starting this week. But one is Outlander. Yay.

I’ll figure out how to fit it all in.

I’m disappointed in the tulips this year. I need to do some reading from “tulips for dummies” to see if I can figure out the problem.

These blooms are looking pitiful. The backyard is even worse. Oddly, the backyard daffodils looked better than I can ever remember. 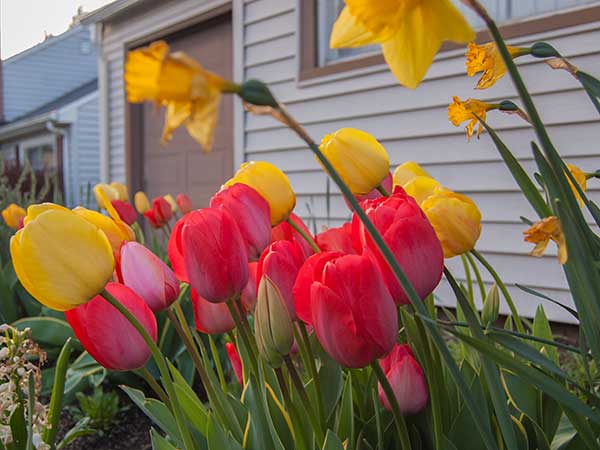 This is a photo of the same area from 2 years ago. I’m not sure it demonstrates the issue as well as I would like.

I am working on a new book that would be part of a series but it is slow going. I can carve out time but only a little bit and it’s hard to get much work done in tiny chunks.

For now, it’s going to be a mystery. Hopefully I can report more soon.

I’ve also started a couple of posts about some of my favorite romance, old school and current. Stay tuned. 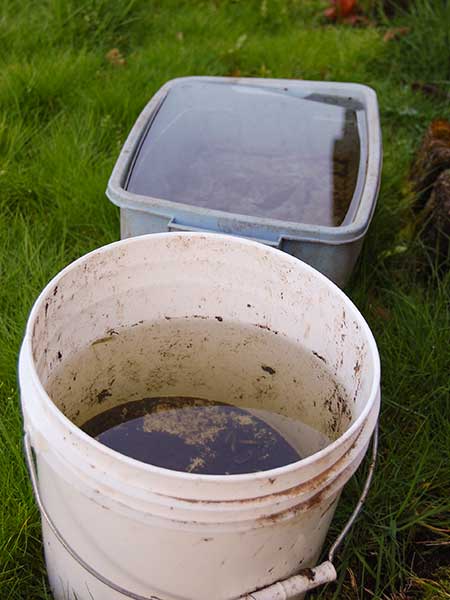 A couple of weekends ago I started working on transferring compost from the bin and working it into the garden spot. I was interrupted before I could finish. Then the weather changed.

My buckets were goopy from compost so I left them in the middle of the lawn. In less than two weeks they were this full from the rain.

I managed to get out and get a little work done this weekend but there’s always so much to do at this time of year.

Future tulips. Next week at this time I’ll have tulip photos. 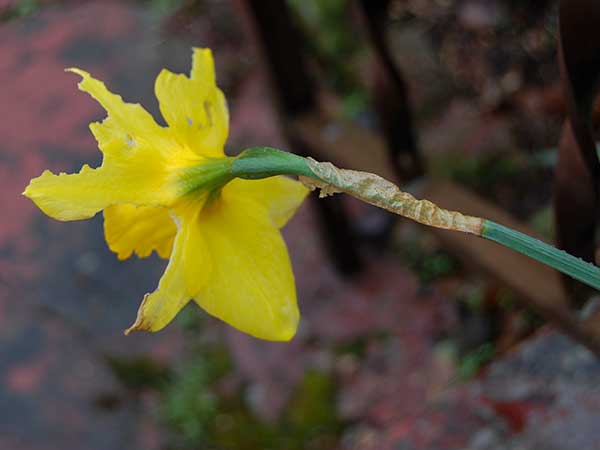 Look – some monster has been eating my daffodils. 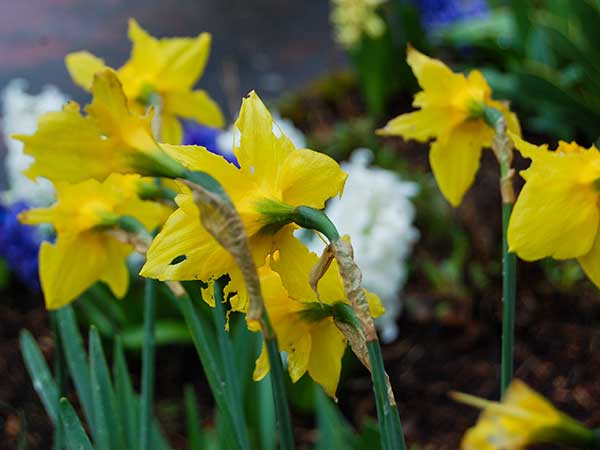 More damage. Only in the front yard. My front flower bed is not very big but it is a massive slug and snail operation. I would be tempted to yank everything out of there and start all over except if it’s just dirt every cat in the neighborhood thinks it’s for them. 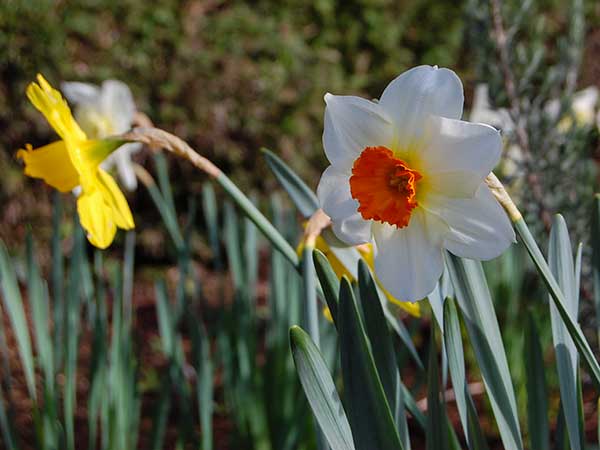 I only have a few with the little orange center and those are my favorite. I’ve been wanting to order more bulbs but last time I bought from a catalog I began receiving an avalanche of catalogs – like every month and all different kinds, not just bulbs. But who buys bulbs every month?

I called and asked them to knock it off and now I receive zero catalogs. There should be an option where you can get one catalog in the late summer and that’s it.

I woke up with grand plans for a productive morning but found an ant invasion. 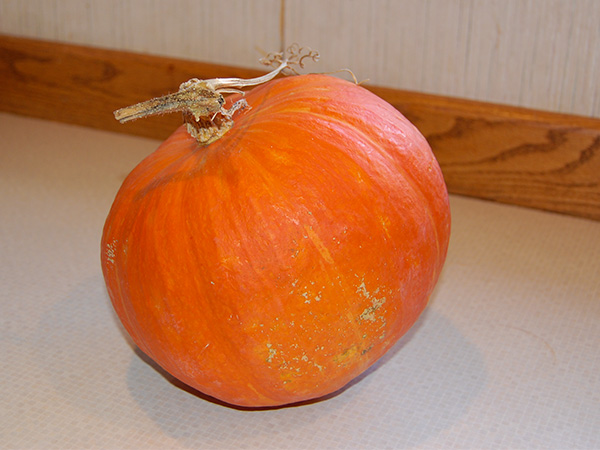 This is the last pumpkin from the garden. I meant to process it a couple of weeks ago but I ran out of time so I did it yesterday. 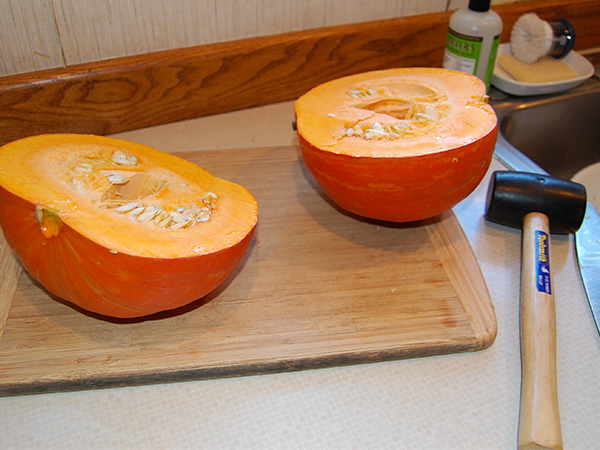 First step, chop it in half. I use the biggest knife I have and a rubber mallet that I think came with the kit to assemble my computer cart. I scrape out the seeds and save for next year’s garden.

Face down on a cookie sheet covered with foil and spritzed with no-stick spray. You can skip the foil but you might regret it when you have to wash your pan.

This year I baked as recommended by Serious Eats approximate 1 hour and 15 minutes at 275. I ended up cooking it a little extra and I probably could have let it go even longer but I was impatient with cooking and wanted to get everything put away. 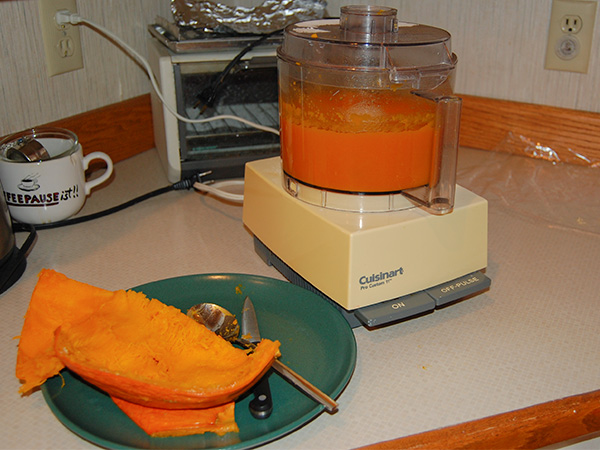 I scrape the pumpkin into the food processor and let ‘er rip. Sometimes after this step I let the pumpkin drain in a strainer lined with cheesecloth but, no patience for that this time.

Half I used in a pot of pumpkin soup and the rest I saved for the freezer. That will end up as a pie or maybe pumpkin chili later this year.

I worked up the energy to dig up a couple of the dahlias and this is what I ended up with. This is two separate wads that I put into one pile. If you’re not familiar with dahlias — these are huge. I can’t remember the last time I dug them. Five years?

This particular dahlia is a plain red one and insanely prolific. You can whack this up any which way and whatever you throw in the ground will probably grow into a flower. This was my gateway dahlia, passed on by a friend. Then I got my first catalog.

The friend has since moved a couple of times and when she heard I dug bulbs she asked me to bring her some. 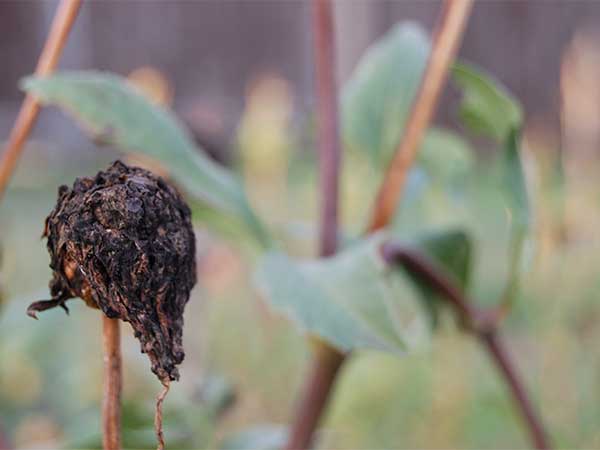 Just a little freeze and here’s what the Dahlias look like.

I need to get out there and do some clean-up. I have a couple of giant bulb masses that desperately need to be dug and divided. Now’s the time but it’s always so cold and muddy it’s hard to get motivated.